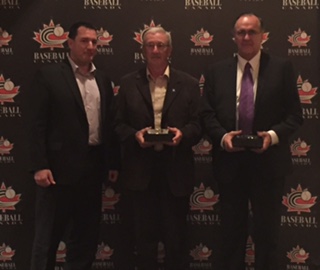 Larry Orth has been a volunteer in the Baseball Sask system for many years. He began in Watrous, SK while he was a teacher there and was also involved with Watrous Minor Ball. He has also served as an Umpire and has always made himself available whenever needed.

He was the Zone 5 Umpire Director from 1993 to 2000 which is one of the largest member Zones and he was in charge of all umpires in that particular Zone.

From there, starting in 2001, Orth was elected in as the Zone 5 Governor, which had him handle all baseball events in that Zone.

In 2002, he was also appointed to be the Senior Supervisor where he was in charge of arranging all Senior Zone and Provincial Championships.

Once Larry retired, he and his family moved to Saskatoon in 2004 and he immediately was named to be a Zone 6 Director while also remaining the Senior Supervisor. He is also a key member of the Saskatoon Umpire Mentoring Program and gives much of his time volunteering to help as many young umpires as he can.

In 2006, Orth has elected as the Vice-President of Baseball Sask where he served in that position for 2 years.

In 2008, Orth has elected as the President of Baseball Sask where he served in that position for 2 years and was then Past President and Playoff Chairman from 2010-2013. During this time as President, he also sat on the Baseball Canada and Western Canada Baseball Association Board of Governors. He was part of the Baseball Canada Strategic Planning Committee as well.

In 2012, Orth was appointed to be Co-Commissioner looking into any discipline required for our Membership. He has filled this position until this current season. However, he has given his notice that 2015 will be his final year serving on our Baseball Sask Board.

Baseball Sask has been very fortunate to have had such an outstanding volunteer such as Larry and we are truly grateful to have had him on our team for the past couple decades.

We will miss him as he now steps down from serving on the Baseball Sask Board and we wish him nothing but the best and thank him for all of his years as volunteer member and friend!