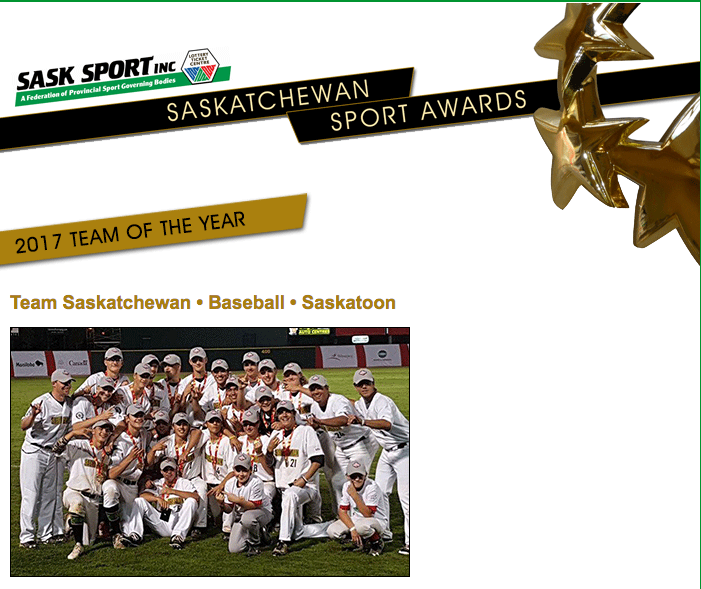 The Team Saskatchewan baseball squad is made up of players from different families and backgrounds, but when they compete on the diamond they are truly one unit.

“Baseball is more than a sport for this team because of the lifelong friendships and bonds we have made with each other,” said team member Connor Sparks. “We have learned a valuable lesson that if you work hard and believe in yourselves, even if you are from a smaller place or are the underdogs, you can achieve your goals.”

Although the make-up of the team changes every year, the core group of players have been together for the past four years. As Sparks explains, the team has improved over the years by focusing on executing the fundamentals, while also showing respect for each other and the game.

Team Saskatchewan is a finalist in the 2017 Team of the Year for the Saskatchewan Sport Awards-an annual awards program of Sask Sport Inc. designed to celebrate and promote the outstanding achievements of Saskatchewan amateur athletes, coaches, officials and volunteers.

Greg Brons has been coaching most of the players since they were 11 and 12 years old and felt that they were an outstanding group of athletes. “The thing that always got these players over the hump was they had the ability to grind things out and overcome obstacles. I know the term ‘grit’ is often overused in sports, but I can’t think of a better word to describe these kids,” he said.

Sparks also noted that the team had to fight through adversity to get the result they were looking for. “There are always times of adversity, especially over the course of a short baseball tournament, when you have an injury to overcome, or a call goes against you, bounces don’t go your way, and we had our share of that,” he said. “I think what makes this team special is we never let the adversity or situation get us down. Our coaches led by Greg Brons were always very calm and didn’t let us get too up or down, and we responded likewise as a group.”

“Without the volunteers, coaches, officials and organizations, aspiring athletes like us would not have the opportunities that we have,” Sparks said. “Thanks to all of them. Hopefully we have made them proud.”

What makes Team Saskatchewan #SaskProud?
“We loved representing our province and we’re proud to be from Saskatchewan. Saskatchewan and its players do not often get the respect they deserve from the larger provinces in the country. We hope that our achievement of back-to-back national championships, including the gold medal at the Canada Games, maybe changes that perception a little bit. We showed that it is not a disadvantage being from a smaller province and in some ways, it was actually our advantage with the closeness of our group.”