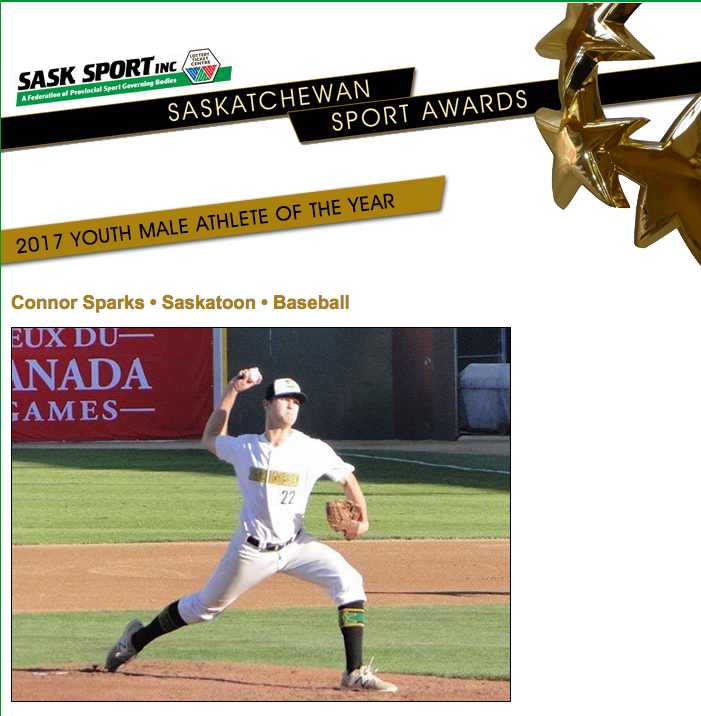 At a young age when many other children were playing in the sandbox, Connor Sparks was grabbing his glove and heading to the baseball diamond.

“My dad loved playing baseball, so I have been throwing a ball, catching and swinging a bat from the time I was a toddler,” Sparks said. “Since I was four, I can’t remember a time that I wasn’t playing some form of baseball: with my dad and brother, either in my basement as little boy, in the back yard, the street, or school park with friends and on organized teams.”

Sparks said it’s not easy to put his passion for baseball into words, but he simply feels at his happiest when playing the sport.

“There is no place I would rather be, than on the pitcher’s mound or in the batter box,” he said. “I like the atmosphere of baseball, the friends I have made, the skill it takes to compete at a high level, and being part of a team of individuals working together.”

Sparks is a finalist in the 2017 Youth-Male Athlete of the Year for the Saskatchewan Sport Awards-an annual awards program of Sask Sport Inc. designed to celebrate and promote the outstanding achievements of Saskatchewan amateur athletes, coaches, officials and volunteers.

He won a gold medal with Team Saskatchewan at the Jeux du Canada Games, posting a batting average of .417 and only giving up two earned runs while pitching 10 innings. He also ranked fifth at the Roberto Alomar Tournament 12 Showcase, competing against 160 other players, striking out 12 batters in five innings. He was asked to join U18 Team Canada to play against Major League Baseball (MLB) fall extended teams. As a part of Team Canada, he pitched six innings versus the MLB Fall Extended Team – Pittsburgh Pirates and Toronto Blue Jays, giving up three runs. He will be joining the Junior National Team again and will be competing in spring training and extended spring training.

“It’s hard to put into words how 2017 felt,” Sparks said. “I can say it felt truly amazing to have achieved excellence alongside my coaches, teammates and some of my best friends. To be invited to play with the Junior National Team is a dream come true!”

Sparks is looking to build on his momentum and continue playing well at the college level, while earning a degree and making some new friends. One day he would love to play professional baseball. He also hopes to set an example for other athletes through his work ethic.

“I try to set an example of hard work, respect for the game, my coaches, teammates, opponents and umpires-I have to try harder for them sometimes-while at the same time enjoying myself and having fun playing the game I love,” he said.

The process of achieving success in baseball, he noted, is important for development outside of sport.

“Sport teaches life lessons about sacrifice, discipline, teamwork, humility, how to handle success and failure,” Sparks said. “Sport has given me confidence to face challenges and to set goals and strive to achieve them.”

What makes Connor Sparks #SaskProud?
“I am SaskProud because I truly love Saskatchewan and the people who are from here, and I have felt honoured to be able to represent the province at the Canada Cup and Canada games. I would truly like to thank the volunteer groups in Saskatchewan for the countless hours that they put into amateur sports. Without the volunteers, coaches, officials and organizations, aspiring athletes like myself would not have the opportunities that we have.”