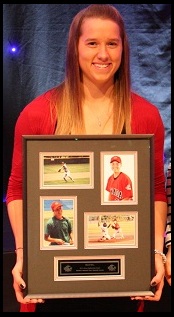 After undergoing knee surgery two years ago that caused her to miss the 2010 World Cup, Bradi made her World Cup debut with Team Canada in Edmonton. Steady, is the best term to describe Bradi as she made all of the routine plays on defence and came up with some web gems at other times in starting all nine World Cup games at the ever-important shortstop position.

Bradi’s ‘steadiness’ carried over on offence too as she provided stability at the bottom of the order hitting .387 with three doubles, two triples and 11 RBIs. A highlight in Bradi’s tournament came in an extra-innings win over Team USA where she cracked a bases clearing double in the top of the 8th as part of a 7-run outburst for Team Canada.